As you may have read in this earlier post, I’m very much in love with my 50L, despite its poor test results and condemnations from people who don’t have the desire or the patience to learn its idiosyncrasies and work within its limitations. I think the images it produces have a kind of magic that cannot be measured with charts, and cannot be seen at pixel level. It works for me.

Although I’m not much of a wide-angle photographer, I do feel a bit naked without a 35mm in my bag, so when I was buying my new Canon kit a couple of years ago I included a Sigma 35mm f1.4 Art on the strength of it’s almost unanimous acclaim. It’s heavy but very well-made, super-sharp, and a lot cheaper than Canon’s 35L. But mine wouldn’t focus consistently, despite many hours of adjustment with the Sigma Dock, and a trip back to Sigma for servicing – when returned it was exactly the same as before. In tungsten light, it just wouldn’t focus consistently on anything closer than 2m. Sometimes it would focus in front; sometimes behind; it was simply unreliable and I had to let it go.

So! Still in the market for a good 35mm lens, my curiosity was piqued when I saw reviews comparing Canon’s 35mm f2 IS to the 35mm f1.4L. “Every bit as good, but with 4 stops of image stabilisation thrown in, and at less than half the price!”, they said. It sounded too good to be true, but I thought I’d check it out. Given my experience with the 50L, my preference is to avoid all reviews which show charts and graphs of sharpness, and instead look for images made by great photographers which show what any lens can do in the right hands. I set off to find images made using both lenses (35L and 35is), and after a lot of trawling through Flickr Groups I’d found many photographs made with the 35L which really jumped off the screen at me, but I have to say I didn’t see many (any!) photographs from the 35is which had the same impact. I concede that this might be because the price differential between the two lenses means that a greater number of less demanding photographers are using the 35is, and this was reinforced to a certain extent by a couple of ‘real-world’ reviews which I eventually found:

Some of the great images in the reviews above made me think twice, and demonstrated that, in good hands, and with careful processing, the 35is is capable of making very attractive images. But I couldn’t help wondering what the same shots taken with the 35L would look like. So… I borrowed both lenses for a weekend to see if I could do a controlled experiment – to take identical ‘everyday’ photographs with both lenses and see what differences could be observed.

Disclaimer: with only a couple of days to test these lenses, and because it was important to shoot many frames in controlled circumstances, I’m afraid the images aren’t very imaginative or stunning examples of great photography. They’re just straightforward snaps, but I think they do show enough to highlight some differences in the lenses.

Where 1:1 crops are included below, click on the images to launch full-size versions (you may need to click again to magnify them if your browser forces them to fit to the window size). 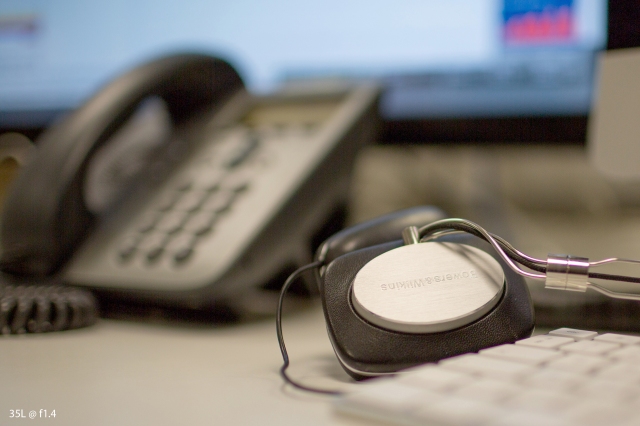 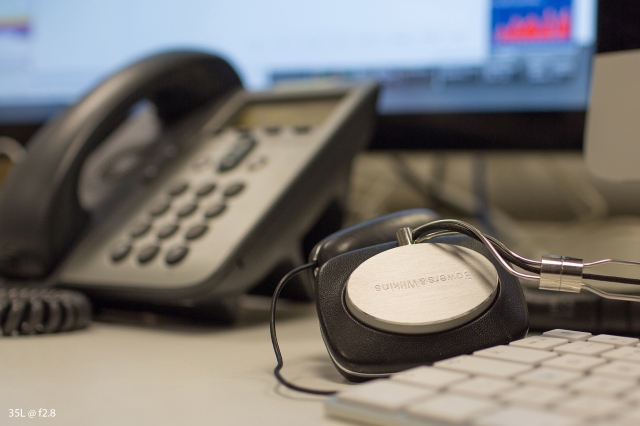 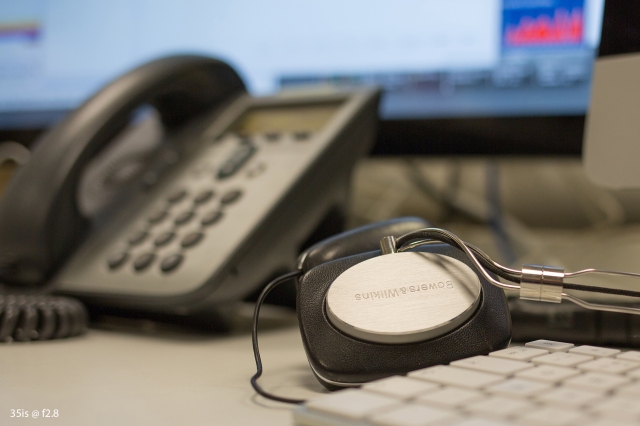 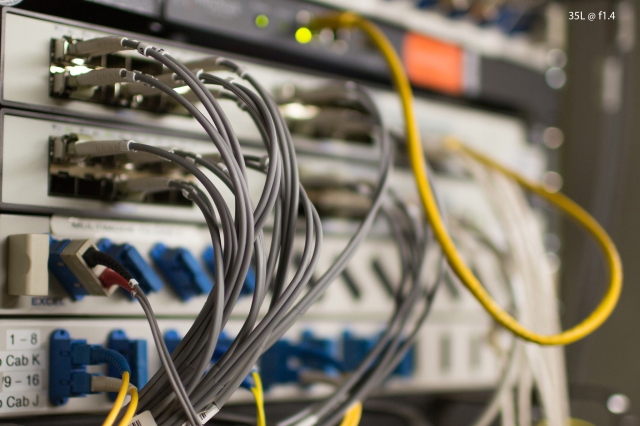 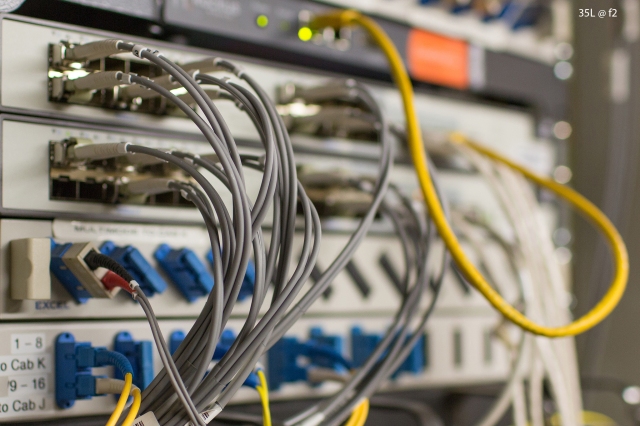 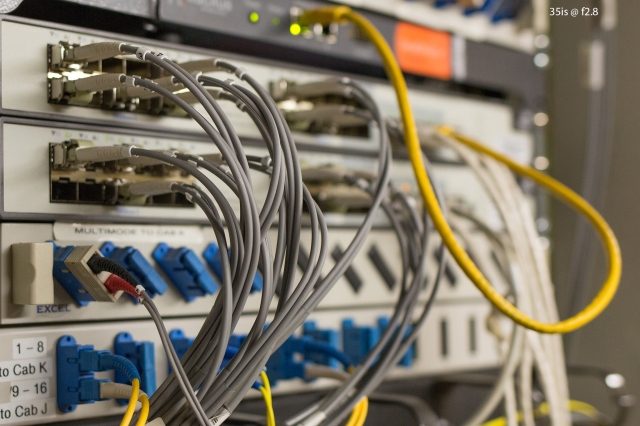 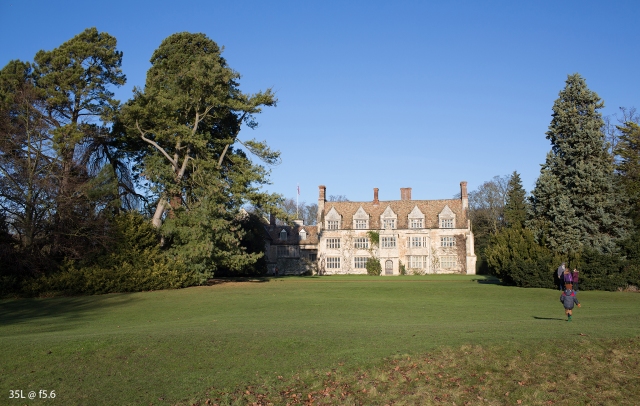 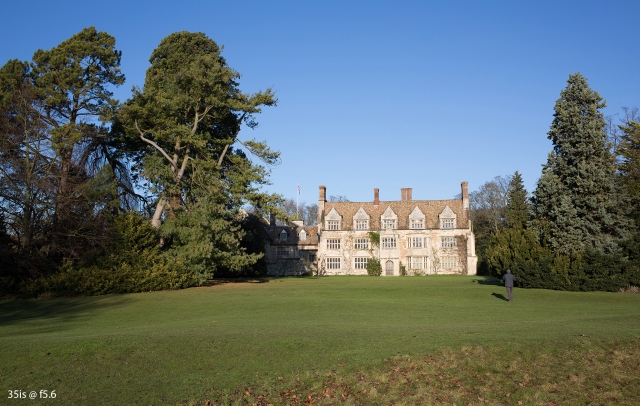 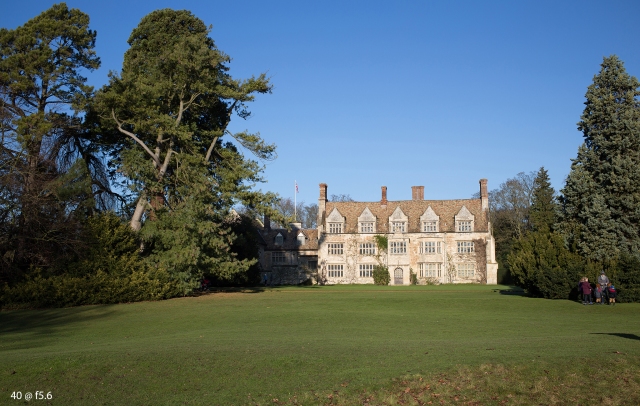 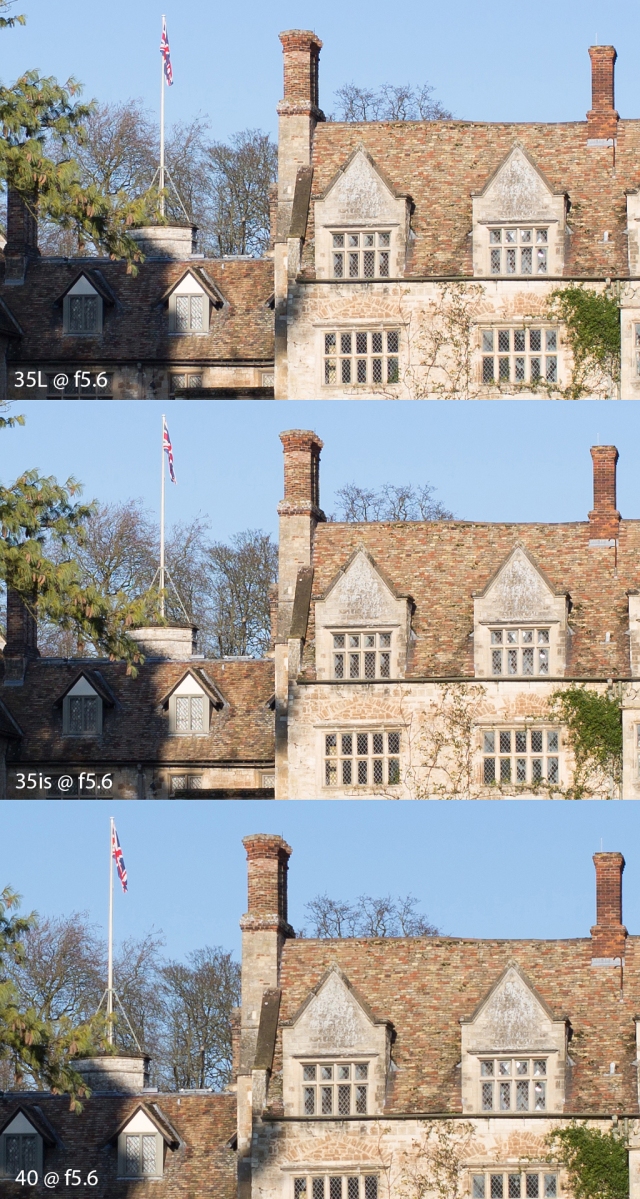 TEST 5 (Blind test – which one do you prefer?)
Both shots were taken at f2.8, and are untouched apart from resizing. Try to resist the temptation to download the files and peep at the pixels – just stare into the dark, out-of-focus centre of each image in turn, and see if anything draws you to one or the other. 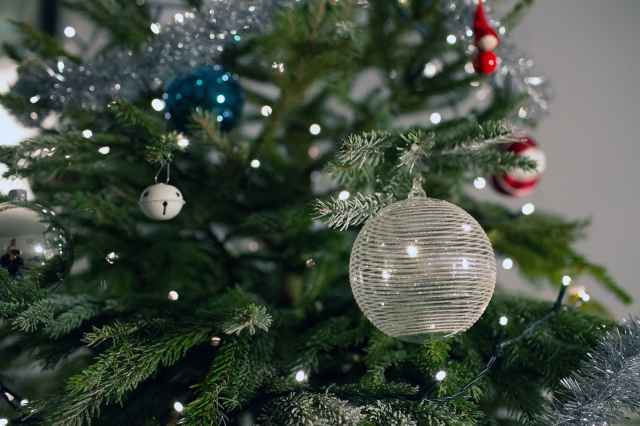 35is pros: Sharp after f2; neutral; well corrected; light; image stabilisation.
35is cons: Noisy bokeh in some circumstances; slightly soft at f2; I also noticed that the 35is required a little more exposure than the 35L (my auto-ISO jumped half-a-stop every time I attached the 35is).

I guess the right choice for you depends on your interests and values. The 35is is a safe bet for sure and clearly most owners are delighted with it. It’s fast, sharp, reliable and very usable at all apertures. But after staring at the images above for far too long, I still find myself thinking that the 35L does produce a more natural, more three dimensional image (bottom image in the pair above), and better bokeh at all apertures. Chromatic aberration can be fixed or worked around, but there’s no way to fix bad bokeh.

For me, super-obsessed with subject isolation and quality of bokeh, the 35L is the better bit of glass. You might say that the almost imperceptible differences are not worth the extra cost – only you can judge that. I confess that was my conclusion when I wrote the first draft of this page, but now, after staring at the two images above for FAR too long, I believe the difference is clear, and it’s the kind of difference I want to appear in my own images.

This site uses Akismet to reduce spam. Learn how your comment data is processed.